What is a Blue Zone Lifestyle?

What is a Blue Zone?

Blue Zones are regions of the world where it is claimed people live much longer than average…. Such as Okinawa in Japan, Sardinia in Italy, the Island of Ikaria in Greece, Nicoya, Costa Rica and Loma Linda in The United States.

How the Blue Zone concept came about?

Scientist Michelle Poulain studied a group of centenarians in Sardinia who seemed to live really active lives and also enjoy good health. He then drew a blue line on a map where these people lived. Some years later other scientists started to find other groups around the world where people were living between 90—100 in good health and still leading active lifestyles – hence the name Blue Zone. Blue Zones boast many individuals who live past the age of 100. They are often in good health, with lower rates of chronic diseases such as dementia, heart attack and strokes. 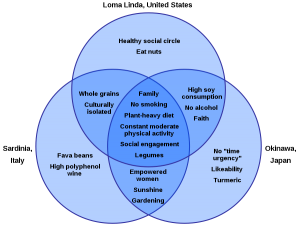 What are the commonalities of the people of the Blue Zones?

What do they eat in the blue zones?

The scientists who studied the Blue Zones found that there were some differences in all the groups but still many similarities. Some ate meat, others were vegetarians, some drank red wine and others drank lots of green tea. But the broad principles were the same:

This is an excerpt from a new book called The Heroes of Lucks Yard written by Tone Tellefson Hughes and Pippa Mitchell.

During the year 2018, the clinic’s annual theme was ‘Active Ageing’ and ‘How to live an anti inflammatory lifestyle’. Tone and Pippa interviewed a group of patients ranging from age 60 to 102, to ask them how they lived their life and what their thoughts were about looking after themselves. These interviews were so inspiring and they were so moved by their responses. This book is dedicated to all their lovely patients who have inspired them. They love the idea that someone in their 20’s might read the ‘Heroes articles’ and become inspired to start looking after themselves more!

Heroes of Luck’s Yard and how to live this anti-inflammatory lifestyle is available to purchase from their reception and watch this space for the downloadable version!

All proceeds of this book go towards their Green Hub Project for teens.